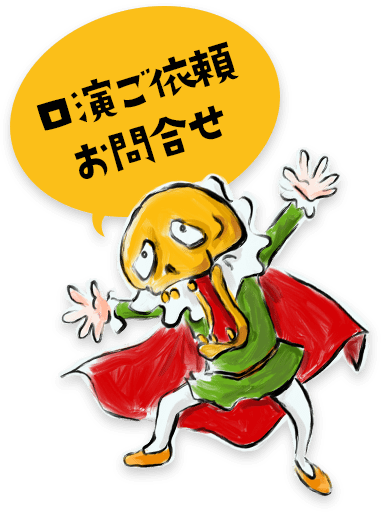 I went to the Doshisha university Imadegawa campus,
and had an opportunity of Kamishibai at one lecture for students from U.S.A., who are taking a program called AKP (Associated Kyoto Program) to study in Japan.
A drawing(by Danmaru and Rakkyomu), which I sent to a professor, was improvised like this.

When  a classroom had a bicycle and a Kamishibai-box…

Isn’t it like a movie theater with a really small screen!?
The chairs which everybody was sitting on had light blue-violet colored cushions, so it really looked like a theater from my side.
Kamishibai Theater is ready.

A lecture begun.
The professor also looks excited, doesn’t he?

Even how old you are, you can put up your hands and say vigorously “Haaaaaai!!!” like children do. This is how people grow up in Japanese.

Even how old you are, prises make you pleased.

Many languages crossed over the room; Japanese, English and Japanglish.
But the strongest ones are smile and laughter.They are universal language.

Of course, Candies were available.

Lined up and wated for their own turn was necessary.

You’ve waited for very long time at the end of the line.  Good girl!!  It’s secret between us!!

Eating candies and having a squad meeting…

It was their turn to do Kamishibai!!

Across the countries, everybody laughed WHAHHAHAAA!!
There are so many countries on this planet and so many languages exist. No one understands all of them, but… Whahhahha!! is an Universal language!!

90 minutes with wonderful people. How was this moment for them? It was one of a happy moment for me. I WILL visit your country in the near future with Kamishibai oneday!

An encounter with the professor at the manga museum from some years ago became this day to come. Thank you for sharing your precious lecture time for Kamishibai. Finally, I’d like to send my huge gratitude to people who worked on this day to realize.

Thank you so much.

A report on recent visiting Kamishibai is now the End!!